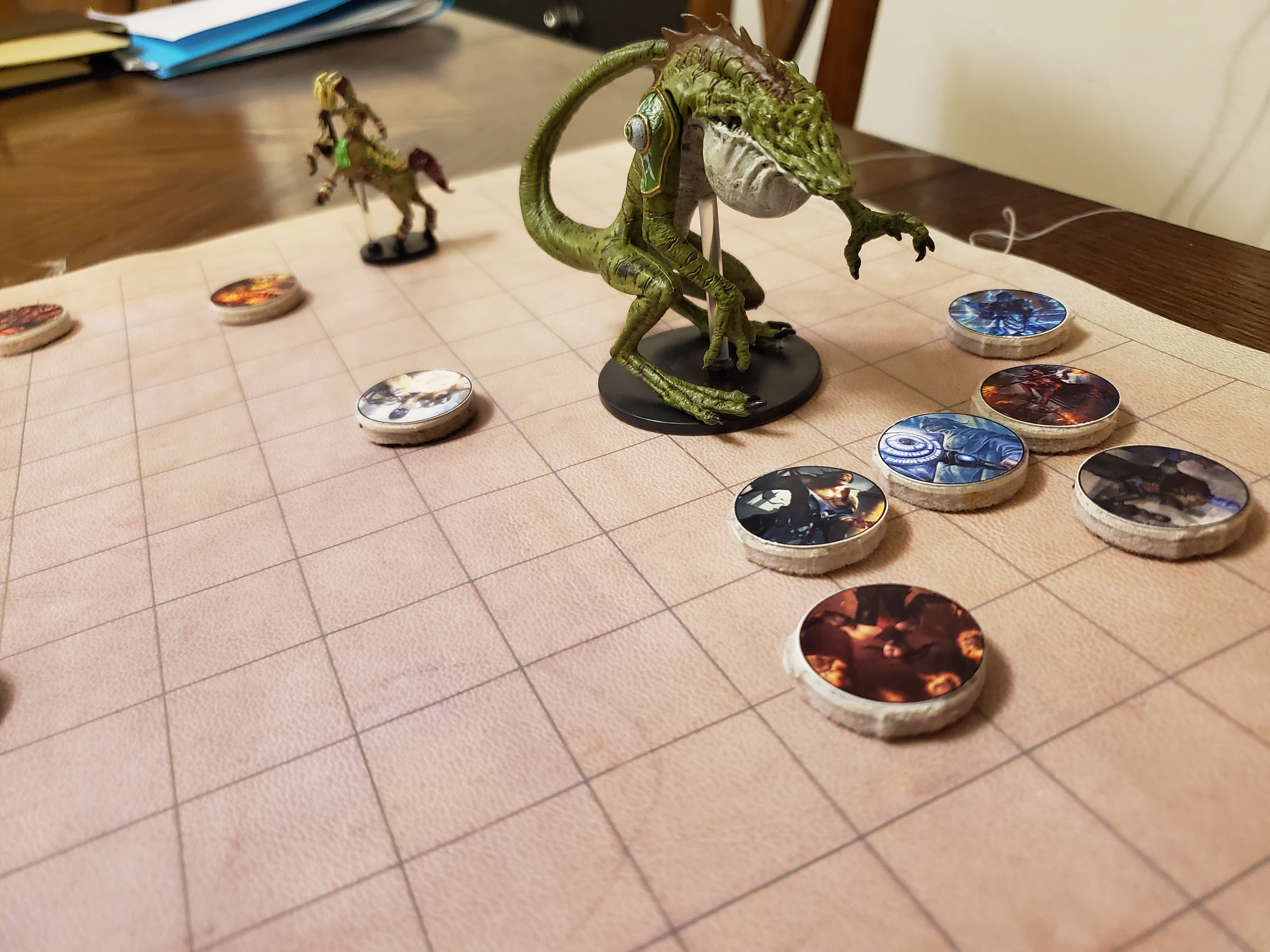 You don’t tell the stories. Your players do.

If you tell the story, the players’ choices don’t matter.

With no choice there is no RPG.

As a GM, our job isn’t to create the story, but to give them opportunities to tell their stories in our world.

We have many roles as a GM. We provide options for the players to explore. We support the engine of the world. We create the set pieces. Essentially, we bring the world into existence.

Ultimately, we try to enhance our players’ storytelling by providing a world with compelling choices for them to make. We can do this by providing mechanical consistency, clear consequences, and active pacing.

Mechanical consistency ensures the fundamental laws of your world make sense. Everything from the numerical rules of the game to the cultural norms of the people require consistency. The more consistent your world, the more informed and meaningful the characters’ choices become.

Core mechanics in an RPG can be broken down into 2 categories, game mechanics and world mechanics.

Good game mechanics are consistent. The rules are found in the Player’s Handbook and Game Master’s Guide.  Typically, you put these on your GM Screen. Take 5th edition DND. Characters are all built using the established rules. They are generally balanced around each other so everyone gets their chance to shine. Monsters are built with numerical logic and have rules for building fair encounters. Skills, attacks, and actions all abide by numerical and context driven adjudications.

To keep rules a central focus of your campaign, ask yourself the following questions during your next prep session.

Use these questions to focus your prep and create a solid foundation that supports and enhances meaningful decision making.

World mechanics include all of the rules and customs that exist in your game world. They describe the laws and beliefs your NPCs follow. These mechanics speak in the language of the world and not the mechanics of the game.

To get a feel for the type of mechanics, ask yourself the following questions. How do gravity or magic or the seasons operate in your game? What customs do the people follow, and what happens if they don’t follow them? What are the politics? What does the distribution of wealth say about their governments? How developed is their technology? Is death permanent? What are the relationships between races? How do people use magic?

Fortunately, world mechanics are often packaged in a chosen setting or genre.  A high fantasy dungeon delve in the Forgotten Realms instantly fills in many aspects of the world. Start with the basics, then make your own adjustments to fit the needs of your world. Once you define your mechanics, stick to them, and you’ll give your players context.

Once you and your players are clear on the mechanics that govern your game, you need to standardize the consequences associated with them. A meaningful consequence comes as a logical extension from both the mechanical rules and the rules of the world.

Why you don’t run the story

Narratives, though, don’t often like playing by the rules. Narrative wants the bad guy to lose right at the end, during the climax of the story. It wants the heroes to lose in the middle, then fight their way back to come out on top. Predestined stories, then, are at odds with the idea of impartial rules. Any confrontation between the heroes and an antagonist could result in the death or failure of either side. All it takes is a random crit on a roll and suddenly things aren’t going the way you planned.

A story is a sequence of events that moves characters through a predetermined plot. What happens when your preselected story conflicts with the rules? What wins? Do you sacrifice the integrity of your world for your story? Or, do you let things happen at the expense of your preselected outcome?

That’s why you don’t get to run the story.

If we drive the story, we take choice away from the players. Any time you let the players interact with your world you run the risk of them taking a path you don’t want them to go down. This is by design. RPGs are all about unique and collaborative stories. When you prioritize your vision of the story over your players’ agency, you’re not really playing an RPG anymore.

The Alexandrian Illustrates this dilemma in his “Don’t Prep Plots” series. He uses the example of Dracula by Bram Stoker. What if Dracula dies early? The story, as written, is over. In an RPG though, killing Dracula could result in your players spending the rest of the campaign dealing with his angry brides. That’s still pretty cool. The story may not go as expected, but it will still be exciting. When the players drive the story through their choices, you get an engaged group invested in their unique story.

We can foster this type of play by building logical outcomes around the meaningful choices you created for the characters. The rules of the world, the mechanics of the game, and the characters’ motivations determine the shape of the potential outcomes. Instead of figuring out all potential outcomes, define the extrema and use them to describe the rest. By defining both absolute failure and overwhelming success you get clarity on the shape of the outcomes

What happens if the players fail, miserably? Do you want them to die? Will the campaign be over? You want to find a meaningful consequence you are comfortable with that can still keep the game moving.

What if the characters achieve overwhelming success? What does it look like? Does the antagonist die? Is there a campaign left? How would the world change to a success of this magnitude? Can you live with this outcome? How does the campaign change?

Doing this is empowering. Suddenly, every decision your party makes you can handle. Consequences can now be resolved as shades of the two extremes. You can now adjudicate their actions without removing their choice OR destroying the campaign.

Proper pacing is a key component of any good story. In Role Playing Games, the frequency of meaningful choices you provide sets the pace of the game. Furthermore, the space in between these choices directly affects the overall pace of the session. When there’s more stuff in between each choice, the space between choices increases, increasing the pace. Choices the characters make dictates the pace your session. You can fill the gaps in between with lots of stuff, such as:

·       Defining the premise, situation, and goals

·       Providing time for your players to deliberate on their choice

·       Transitioning from one choice to the next

By intentionally using the above tools you can create meaningful physical pacing to match the mood and atmosphere of the scene.

What do we do to best use pacing in TTRPGs? First, determine the pace you want. Do you want it fast and intense, or slow and thoughtful? Second, identify the number of meaningful choices you need to match that pace. Prepare lots of choices for a fast pace with split-second decisions. Put together only a few for a slow, contemplative, and deliberate pace. Combat against a horde of goblins is a fast-paced scene, filled with many high energy, rapid changing decisions to make. A dinner with a king, on the other hand, is slower, with time to explore the political intrigue of the scene.

Conversely, the political dinner requires long and expansive expositions. Give plenty of time for characters to explore, gather information, and unravel the intrigue before making their decisions.

You’ll feel it if your gaps don’t match the pace. Long descriptions in intense situations bog down the scene, while short, fast paced details make a slow-paced scene feel hollow and barren.

Finally, keep track of your meaningful choices. Sometimes, when narrating between choices, you can skip over situations players wanted to explore. When that happens, players may feel like they missed out on a chance to engage with a meaningful choice.

You can prevent this by talking with your players. As you narrate, ask them, “This is where you are going. Is there anything you want to explore before you get there?” This gives them the opportunity to make decisions on things you may not have noticed as significant.

The opposite can happen as well; don’t create meaningful choices where they don’t exist. If characters are in a scenario where there are no risks to time, health, or resources, then move on to the next scenario that does. If your players are exploring a barren dungeon, with all the time in the world, don’t ask them at each crossroads which path they want to take –it doesn’t matter. As you narrate, ask yourself, “Does this choice affect the players in any significant way?” If not, narrate past it.

It’s a balance juggling between the two aspects. As you use these two questions at the table, you will get a feel for the cadence that feels good for your group.

As the GM you have the power, and responsibility, to optimize the quality of stories your players create. Take the time to know the mechanical and world building rules of your game. Define the shapes of consequences surrounding meaningful choice to provide consistency. Manage the frequency of meaningful choice—and the length of the gaps in between—to create pacing that enhances the narrative.

When you take the time to focus on these keys, you’ll stop forcing your own story and instead create an environment for your players to tell stories that are uniquely their own.