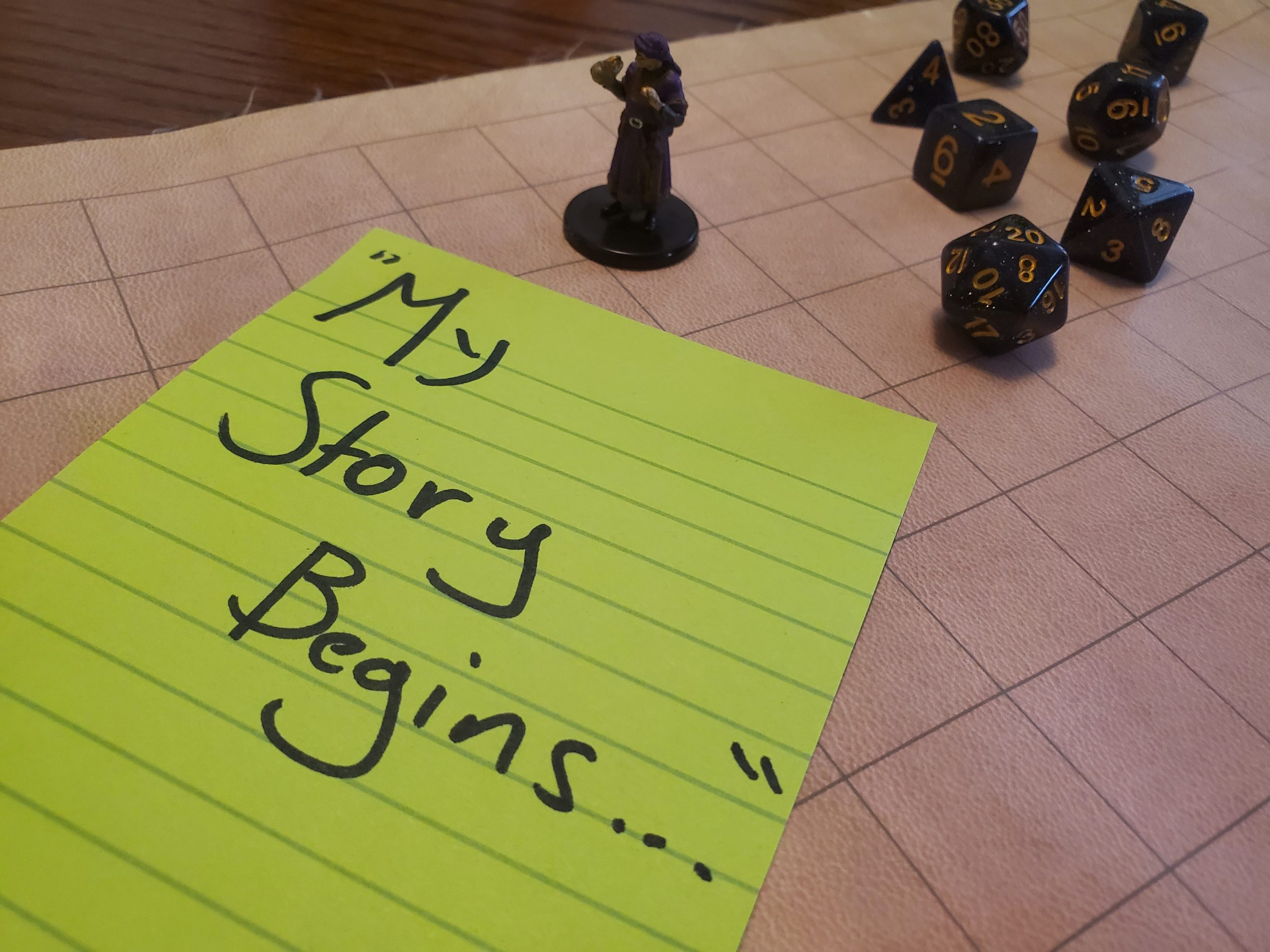 Background Hacks for my Next Campaign

People like backgrounds. Building one personalizes your character and helps figure out what’s important. They give the players context. When a player takes the time to intentionally develop their characters background, you get motive, meaning, and purpose behind the character’s actions. When players act with that greater depth, the decisions in the game become more meaningful.

I want to delve deeper.

Designing the Life You want to Play

Building characters are a lot like how personal development books tell you to “elevate your life.” I’ve been spending time exploring the genre and the similarities are pretty strong. I arrived at two general conclusions. Changes are made from intentionally going after what you want, and solutions come when you start acting from within. Why not test these theories through character creation in our TTRPGs?

Backgrounds need to be meaningful. They should influence the choices the players make. The context given should enrich the play experience, and add nuance to choice. A well-developed background system should provide both a deeper role play experience and mechanical benefits to the game.

Each facet of a character provides the player opportunities to explore themes and ideals. Their morals, beliefs, skills, experience, and personalities all give interesting avenues to engage with at the table. You want to focus on depth without adding needed complexity. When building a background for a character, the mechanics should be easy to build, track and use. When figuring out what I wanted, I decided to go with a collection of homebrews to enhance these experiences for the players.

One-shots and longer campaigns needed different background templates. With a one-shot, everything was over when players left the table, the enhanced backgrounds needed to be a short form to let players quickly identify the key beliefs that motivated their character. In longer campaigns, rules to flesh out backgrounds provide a framework to really explore each character in developed arcs throughout months of play.  The form includes specific details that allow for thought out beliefs and formative moments, while utilizing enhanced mechanics to support them in the game.

If you’re interested, I have PDF versions of the rules I’m using. I’ll send you a copy of each if you email me at engineeredadventures20@gmail.com with the subject line “Backgrounds”. Or you can put your email in one of these forms and I’ll send them over to you.

For the one-shot campaign, I developed a quick 2-minute questionnaire to help players quickly figure out what they want from the session. After explaining the world and premise of the game, I gave out the one-page handout with 3-6 multiple choice questions. The questions surrounded their motivations, goals, and experience working for their interguild crew.  At the end, I asked an open-ended question about the one rule their character wouldn’t break.

The questionnaire let them christen their premade characters, while giving them a chance to flesh them out as a real person in the game world. We spent 10 minutes sharing their characters to the group. It was a good ice breaker and helped determine what everyone wanted from the session.

There are two parts to a good background: their formative events, and the actions that got them there. The formative events drive roleplay and give context to their decisions. The actions the PC made be represented both in the story and the actions of the game. These features need to be initiated by the players. The following homebrew background features I put together are collections of ideas from The Angry GM, The Alexandrian, the Lazy GM, and a couple of my own ideas and tweaks.

What did the characters do before they became an adventurer? How did they live? What skills did they develop? Who, and what, did they care about? Each question develops who the character was before they became the people in the story. Then, figure out what caused the character to leave it all to pursue adventure. Why did they leave? What did they lose? What are they hoping to gain? How are they different from choosing to follow this path? Use these questions to figure out their primary goal, their motivating beliefs, and they defining personal statement.

Story elements for the mechanics

Other character traits need to be determined to establish how the mechanical features will be used in the game. Specifically, identify the core values, defining moments, and character flaws for each player character.

Determine two core values that govern the character’s life. These shape a character’s choices as they work to uphold their values. Meaningful decisions can be explored with core values conflict with external goals or the values of other characters.

Figure out two defining moments in a character’s background. These events serve as core memories that shape that character’s view on the world. They define the traits, experiences, and actions that are significant, both positively and negatively, to the player.

Finally, identify up to two fears, flaws, or false assumed truths the characters believe. We identify with flawed characters. Introducing these weaknesses introduces relatable humanity. Exploring how a character overcomes these flaws can create meaningful character arcs in your campaigns.

I want the story mechanics to reflect the background stories in the game. Each additional mechanic introduced to the published backgrounds must support the choices made without making it too complex that it bogs the story down. The following changes support the intentional choices made in defining their core values, defining moments, and central flaws.

Core values represent the essential driving motivations in your life. To represent that, I introduce the core value die (1d4). At any time, they can add the die to any non-attack roll as long as they can reasonably justify it resonates with one of their core values. Depending on how things go, I am considering expanding on the idea as they level up. At certain milestones, they may be able to increase their die size, or pick another core value.

The characters should feel like they were exceptional at something before they started questing. Even before they became heroes, they had a developed skill that made them good at their former life. To support that, I allow expertise and an additional tool proficiency that resonates with their core background features. Also, they can add their tool bonus to every related knowledge-based check, in addition to any other bonus they receive.

Experts in a craft often notice related details far better than a standard layman. To better simulate that, I’m introducing the Core Observation Action. The bonus action is an enhanced perception check that lets you see things through the lens of one of your core backgrounds features. When a character surveys a scene, they ask the GM, ‘Based on my background feature, what else am I seeing here’? As the GM, you decide what else they would notice.

There’s no roll to a core value because it’s assumed the character knows enough about their craft that they would notice it anyway. The Core Observation shares the act of world building with the players, letting them identify features in a scene they want to interact with. It also simulates the phenomena of using your Reticular Activating System to see what is already familiar.

Character flaws are the driving force of many famous stories. Characters are driven by their fears & false assumed truths until they are changed through the plot. In TTRPGs, not everyone wants their characters to have flaws, so I’m trying out Angry’s opt in method. If the characters aren’t already disadvantaged, they can tell the GM they are engaging in their flaw to gain disadvantage on a roll, then immediately gain advantage on the roll right after that. It simulates the idea of facing your fears and the surge of confidence that comes after.

Finally, I want to provide a catch all mechanical that let them explore the experiences the characters gain through play. I include an experience die (1d4) they can use this on any d20 roll that resonates with any experience their character gained. This ability recharges after taking a short or long rest. You can also recharge the ability by taking a negative personal experience die on a non-disadvantaged roll, if the action negatively resonates with their experience.

I liked Angry’s article on map makers. If someone is the designated map maker, couldn’t you designate players to keep track of other facets of the game too? Players can be responsible for collecting and documenting specific details.  Player roles could be focus on combat, exploration, or social details, each responsible to keep notes on that specific pillar of gameplay. You could designate a quartermaster, responsible for tracking inventory, weights, and consumables. Someone could also play as the quest tracker, collecting all the plot hooks given throughout a campaign.

The idea of the caller could be useful too. I have been guilty of letting the loudest player act first. If we want to keep the focus on group decision making, designating a speaker for the group could be worth exploring. You could even change the designated caller at the beginning of each session.

Testing out the Homebrew

I want to provide customization options to make each character feel unique. Each homebrew mechanic was chosen to flesh out the character’s story and provide mechanical benefits based on their backgrounds.

We start session zero in a few weeks. I am looking forward to testing these features and seeing how they change the way players engage in the game.