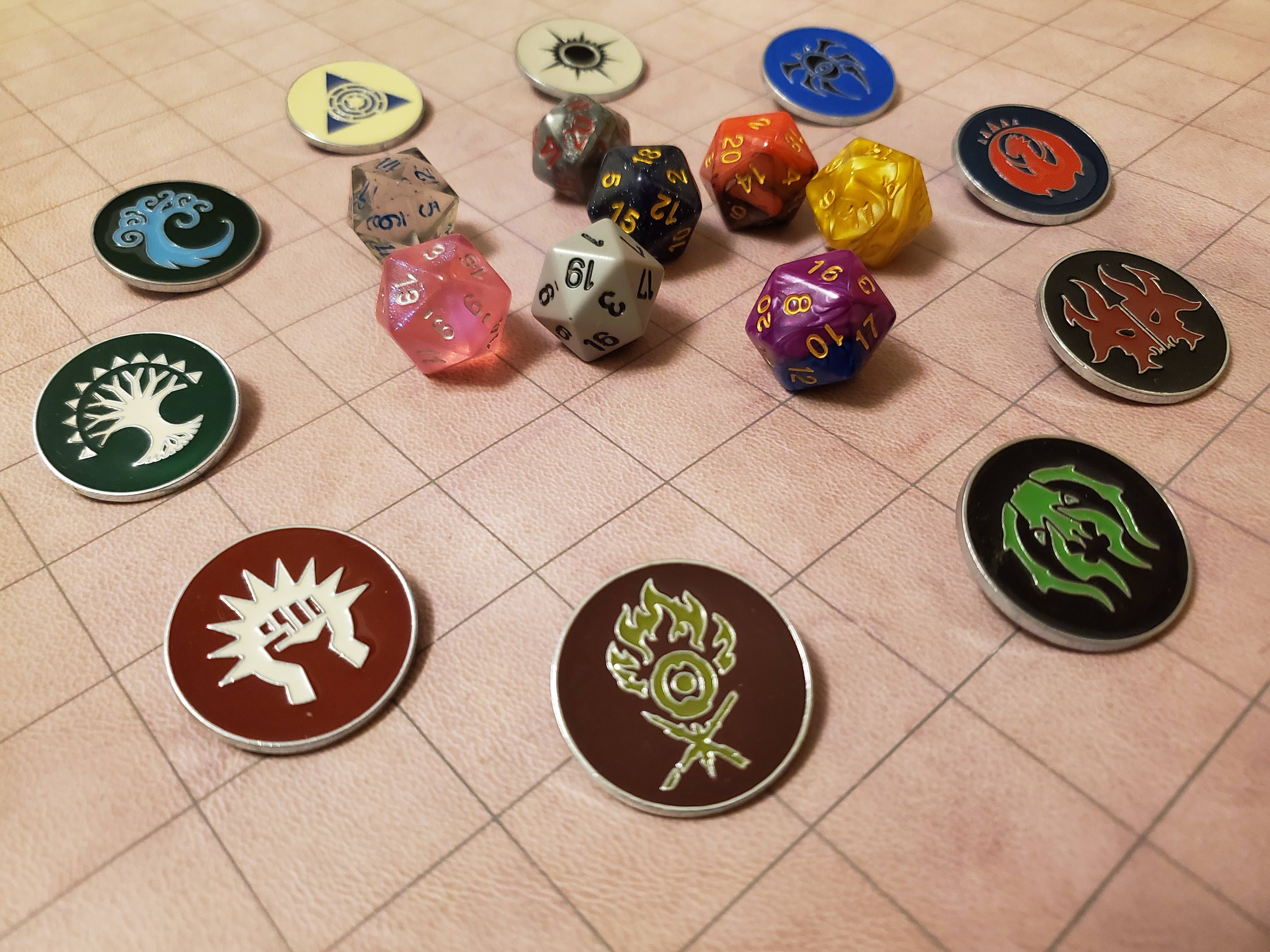 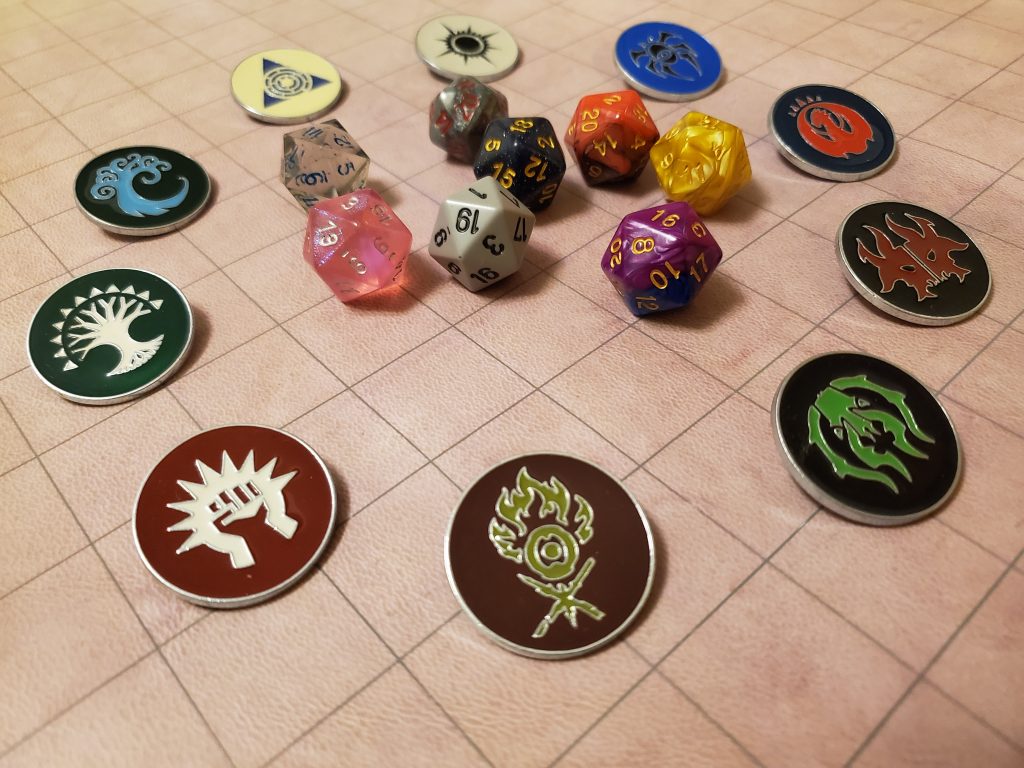 I’m building a one shot in DnD’s 5th Edition setting of Ravnica, introduced in the “Guildmasters’ Guide to Ravnica” published by Wizards of the Coast.

For those unfamiliar with the Ravnica Setting, it is a world setting for 9 distinct expansions in the Magic: The Gathering card game. Last year, the setting was introduced to the 5th Edition of Dungeons and Dragons with the introduction of the “Guildmasters’ Guide to Ravnica”. The setting takes place in a world spanning supercity run by 10 Guilds, each with their own distinct roles defined by a magically binding Guildpact forged over 10,000 years ago. Recently, the Guildpact was shattered, later to be reforged by a powerful mind mage known as Jace Beleren. He became the embodiment of that Guildpact, such that his word on the guilds becomes magically binding law. Jace, however, has vanished. In his absence, the guilds conspire to gain advantage over the others.

I ran “Krenko’s Way” a few months ago for a group of MTG fans I knew and it turned out great. The interguild intrigue allowed me to create an espionage mechanic that created teamwork, backstabbing, secrets, and an all-around great time.

Each player chose one of the 6 pregenerated characters as we went over the basic lore of the setting. The players were given a short questionnaire to flesh out their backstory and their connections to the plot. Before we started, I encouraged them to utilize their established relationships with each other and work together to complete the quest. Then, I handed around secret envelopes and told them they could do what they want with the information. The envelopes contained information on an NPC contact they could lean on during the quest, and a specific mission they were asked to accomplish during the session. If they accomplished their task, they would gain wealth, renown, and clout in their guild.

The mechanic was a resounding success.

Everyone stayed engaged throughout the night. They listened to each NPC intently, looking for opportunities to advance their goals. Motives between the players were cross-examined intently, each looking for the angles they were trying to accomplish.

At first blush, this sounds like a horrible idea.

We hear stories all the time about the “chaotic neutral” loner who would steal from their friends. Or the murder hobo who attacks the townsfolk in front of the paladin. The reason this worked, is each quest objective was concurrently compatible with the main goal. In fact, completing their own objectives was not necessarily mutually exclusive to others’ objectives. Conflicting agendas were still on the table, but they all could be done while still finding the McGuffin and returning them to the authorities.

Essentially, I’m utilizing the idea of the “Office of the Guildpact” to run short crime investigation adventures, where the PCs work as a squad tasked to solve interguild problems in the 10th district. We assume all of the characters are coworkers and friends who have spent time together solving crimes. Each character though, still maintains a strong allegiance to the guild, and are given opportunities from their guild to advance their agendas. With this dynamic set up, each player is incentivized to keep the peace, while covertly advancing through their guild’s ranks. Mechanically, that means each session, players are given the opportunity to achieve their own goals while meeting their squad goals. As I work on this one shot, I’m laying the structural foundations to build an episodic, drop in campaign structure. The juxtaposition between group goals and personal advancement will serve as the campaign’s theme, supported by the guild renown mechanic set up in “Guildmasters’ Guide”

For this year’s convention I wanted to build a homebrew Ravnica adventure showcasing this design structure. I built the story seed from a collection of Magic: The Gathering cards pulled randomly using an Excel random generator. A conflict between the Azorius and the Simic was born, with the Rakdos causing havoc in the background. An Azorius Precog enlists the heroes to stop the rapid hybridization of Azorius guards, preventing the resulting slaughter. With a high ranking Simic official in the Azorius courts, they had no choice but to enlist the team to discover the clues from the vision and stop the heinous acts.

I broke the one shot down into 5 separate scenarios: the intro, conclusion, and 3 cyclic scenarios that give the clues necessary to find the who, what, where, and when of the impending incident.

The intro gives the clues necessary to find the 3 scenarios. Since this is a high magic setting, the Precog Mage produced a major image allowing them to see through their eyes. The PCs are then free to explore the vision, inspecting it for clues. The strength of the player’s observations and the rolls of the character’s skills could reveal clues ranging from the time of day, to key landmarks, to specific individuals and their odd behaviors. Successful checks will identify a justiciar acting oddly, or the group of guards are members of a specific judge running a court session today. Survival checks may identify tracks in the ground, or the time of day based on the sun’s reflection on the street. Good history checks could identify key landmarks in the area, or the faces of individuals in the crowds. Successful insight, persuasion, or intimidation could even clue the heroes in on the Precog’s inherent bias.

They can follow their clues to any 3 following scenarios:

Each scenario was designed with a central conflict, with clues littered about the setting, leading them to the next scenario or even the final event. This cyclic structure combined with the ticking clock disaster allows me the ability to manage the flow of time to ensure the players get to the final scene before the session ends.

In the Rakdos carnival tent, the semi prestigious Rakdos troupe was selected to perform in Precinct 1 on the Transguild promenade for the night’s festival. They were identified by the Azorius, found sick with a fast-acting contagion. The heroes are confronted with aggressive demons in a circus tent filled with clues indicating foul play.

In the Azorius Courthouse, a high-profile case between the Simic and their rights to a Terrarion has attracted a large crowd. The terraforming device was confiscated during an altercation between the Simic and Rakdos during a patrol. Claiming the Terrarion was stolen under duress, the Simic are petitioning to free the incarcerated Simic elf and return the artifact to the Combine. The heroes can gather information on the legislation governing the case, identify motives of the parties, and quell a zealous dispute on the courthouse steps.

In the Griffon Heights Apartments, the PCs get confronted with an Orzhov Priest who is looking to collect debts. After resolving that incident, they enter the apartment covered in ooze. Turned into a makeshift lab, the heroes can identify the whereabouts of the Azorius lawman, uncover the means of triggering the event, and confront an angry ooze.

In the final scene, the PCs combine their clues to identify the scene, confront the culprit, and stop the slaughter games from ruining the festival. Here they discover the motive behind the Simic researcher and their desire to return both her daughter and the Terrarion back to the Simic. How this scenario is resolved depends ultimately on the PCs actions throughout the adventure, and how they respond to their specific mission. While each character’s ultimate goal is to stop the conflict, each guild has their own opinion on how that is to be carried out. Perhaps the Dimir mage needs to infiltrate the booking lists to get information on the woman and what laws they used to secure the Terrarion. The Boros mage may be required to find dirt to arrest the Rakdos circus master. The Azorius mage may be tasked with bringing the potential perpetrator in at all costs, while the Simic mage may be asked to throw the case.

In the end, the heroes are trying to stop frog-lizard-devils from ruining the day. Utilizing a mother and daughter to personalize the conflict between the two guilds we can explore various themes during play. Scenarios are built to highlight the different pillars of play. Taking the time to formally develop the session structure gave me the time to really think on what I want from each stage of the adventure and how best to deliver it to the players.  When preparing your next session, I recommend thinking about what you want from the session. What themes do you want to portray? What emotions do you want your players to take from it? What style and tone do you want conveyed? Figure this out, then structure your prep to meet your needs.

When have you taken the time to formally structure your next session? What did you do to make your preparation more intentional? Did you experiment with anything unconventional? How did your structures change the play experience at the table? I’m excited to see how my preparation techniques change the way my sessions go at the upcoming convention. I’ll be back after the event to share what worked, what didn’t, and what I can do to better prepare for an engaging session of “CSI Ravnica”.