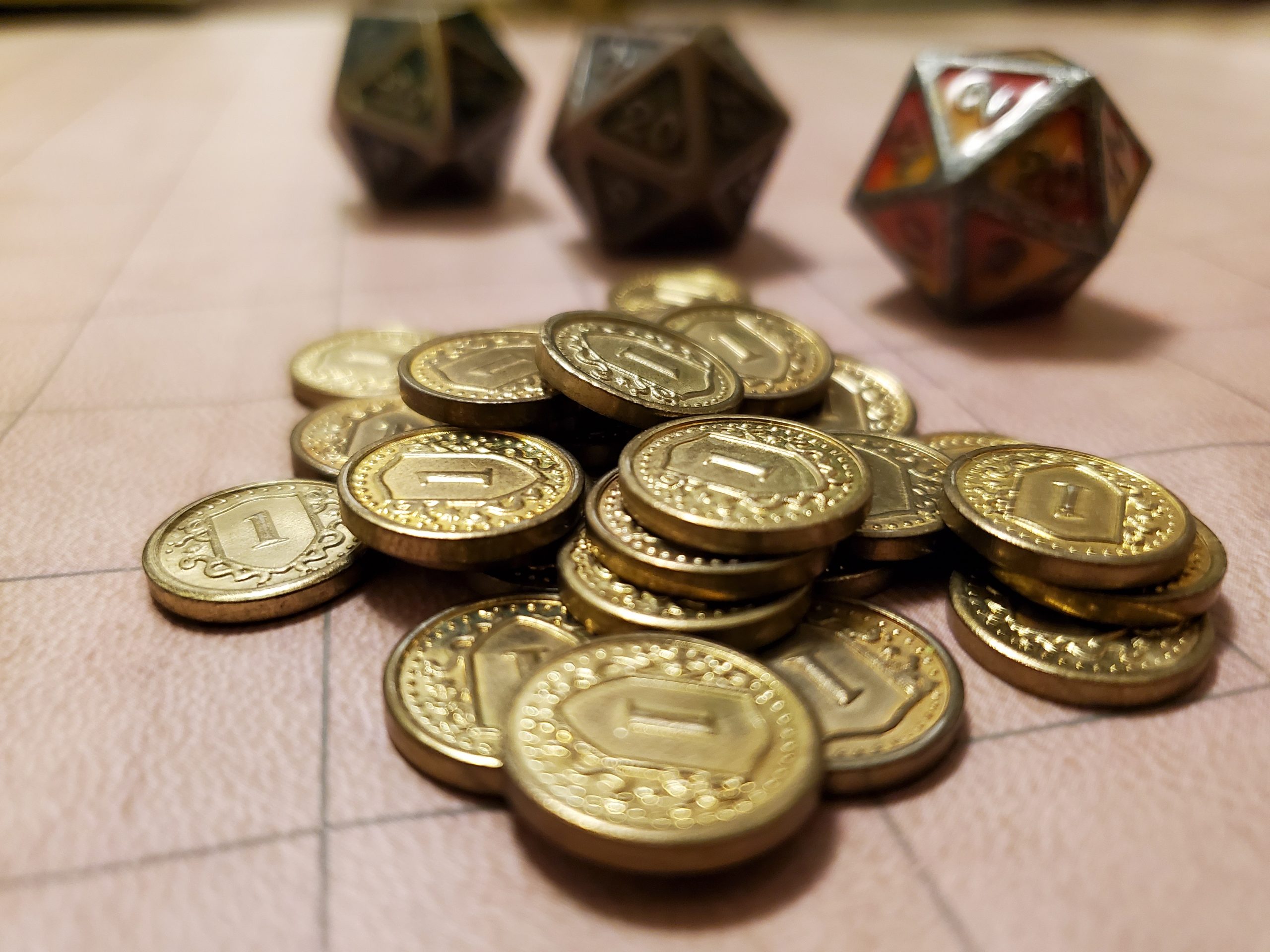 Money motivates people. The accumulation of gold and wealth drive many fantastic adventures. In DND, every quest is chock full of gold and treasure to line the pockets of daring adventures. It’s a staple of the genre. “To the victor goes the spoils.” When the adventure is over, heroes are free to spend their treasures to their heart’s content. What do they buy, though? Where do they spend their money?

Money in our Lives

In everyday life, we use money on all kinds of things. It pays for our basic needs, such as food, clothing, and shelter. It buys tools and opportunities to develop and grow. Money also buys opportunities for joy through trips, entertainment, and toys. How someone uses their wealth says a lot about who they are and what they feel is important. In fact, the way we use, manage, and leverage money in our lives defines some of the most meaningful decisions we make each day.

Money in our Character’s Lives

What can your characters spend their money on? In 5th edition, you can buy supplies, rations, and lodging—but not much else. Mundane equipment is cheap. It doesn’t take much gold to get one of everything just in case. Even consumables are cheap enough to not really worry about running out. You can buy expensive rations and lodging, but they don’t provide much mechanical difference over the cheap options.

In a lot of video games, money buys mechanical upgrades. Significant decisions are made when purchasing an upgrade that would be the best fit for your character.  In 5th edition, many of the significant upgrades are tied to magic items, which, as written, should not be available for purchase. In essence, you can’t use money to upgrade your character. As written, players miss out on the opportunity to use their wealth to mechanically customize their characters.

Gold offers the opportunity for choice. Since we are in the business of optimizing meaningful choice, our job is to maximize ways players can spend their gold. Players should be excited when confronted with troves of treasure. Whether through purchasing new tools and weapons, bribing tricky NPCs, or opening new avenues of exploration, gold should provide ways for characters to influence the world around them. In fact, when used intentionally, gold possesses the power to be just as important as experience points in developing a character.

Many of the ways to use gold are fundamentally subject to the rules of the GM and the world; there simply aren’t enough concrete rules in 5e to facilitate fully functional player-facing mechanics. For example, the PCs could donate their money to build a developed road between a small town and the capitol, as long as the GM allows it. As long as the GM stays open to ideas, there will be ways to spend your gold.

These avenues do not fully capitalize on gold and the potential for choice it provides. Player driven choice requires player facing mechanics. These mechanics necessitate balance and playtesting though to ensure they don’t ruin the game. I want gold to be a useful resource though, so I’m going to test out some options. In my upcoming gothic horror campaign, I’m trying 3 different systems to make gold an engine for meaningful choice in my game.

When selecting these hacks, I kept a few goals in mind. I want to provide the greatest amount of choice with the least amount of complexity. The mechanics must be as close to the base game as possible. They need to be presented early and often, so every time they see gold, they remember what it can do. Finally, the mechanics must be difficult to abuse, so imbalance won’t ruin the game for the players.

1.      Use the Variant Encumbrance Rule

I plan to use the variant encumbrance rules as written, except armor counts as half its weight if you are wearing it and you have proficiency. When item weight matters, you introduce a number of meaningful choices. Do you prioritize rations over a long trek or do you bring extra climbing gear? They now have the ability to decide what items are most important to bring with them on their quest.

While many decry the encumbrance rule as needless accounting, there are ways to create positive engagement. You could designate a player to be the quartermaster, in charge of managing the party’s inventory. Many magical and mundane options suddenly become relevant options. Floating disks, pack animals, and NPC hirelings all become significant options for your players to consider. Items such as magical mounts and bags of holding also become highly valued, allowing people to overcome the low-level struggles of managing weights.

I’m going to provide merchants that sell magical consumables. Players love healing potions, but they often hoard them rather than use them. Scarcity caused by random loot keeps players from using a consumable for fear of wasting it before they “really need it”. If merchants sold magical consumables, purchasing and using them becomes strategic decisions.

Mechanically, consumables are great items to sell. They provide customization options by opening up new avenues for solving problems. Potions, oils, and scrolls can offer offensive, defensive, and locomotive options to help your players intentionally prepare for upcoming threats. Balancing becomes fairly simple due to the temporary nature of consumable items. Prices and restocking frequency can be adjusted to manage the impact of consumables on your game.

Keep merchant inventory common knowledge to the players. When players know they can always restock on potions and poisons at the local apothecary, money becomes a resource similar to mana. Players’ money becomes a way to express the power their characters have available in their adventures. You can also provide discounts to characters who are trained in herbalism, poisoner, calligraphy, and other kits through way of crafting recipes.

I also want to ensure there are merchants that sell magical items. Finding magic items are a great reward for clearing a dungeon and looting the treasure, but finding random loot lacks meaningful choice. Players didn’t choose the item, they just found it through play. When you know a merchant in town sells magical flaming swords or hardened frost armor your money becomes accomplice in making a meaningful choice. When there’s a list, there’s a choice.

Merchants will each have their own unique magic item list.  Building unique item lists for each merchant is critical to making this work in your game. By curating each list, you can provide balanced progression options for your players. Early merchants can have low level options, while advanced, or even hard to find, merchants can provide high level options. Players must know what they can buy, though, to make their gold worthwhile.

Anti-theft protection is also critical to ensuring the game doesn’t fall apart the second the rouge starts getting ideas. (This doesn’t mean you can’t use smith tools or bartering checks to give players discounts though). They could be supernatural patrons or plane shifting vagabonds. They could sell maps to the item’s location, or be smiths that create the items once payment is made. (You could also just tell your players out of game to not steal from the magic item merchants.)

When players know what they can buy from each merchant, they can save for the items they want. When characters have something meaningful to spend their gold on, treasure becomes an alternate leveling path for the characters. Every time they make an intentional purchase a magic item, they are actively deciding how to enhance their character’s abilities.

Furthermore, any decision in game where gold is an option becomes even more meaningful. Do you steal the inheritance of the arrogant but well-meaning duke? Is it worth entering orc territory for the extra gold? Can we delve deeper into the dungeon before running out of health potions? Are my morals worth compromising to get the money for the holy shield? These are meaningful choices worth having in your game.

Heroes get gold because they have the courage and skills necessary to face the dangers guarding the treasure. Gold represents the reward the players get for making hard choices and overcoming overwhelming obstacles. When you provide options for players to meaningfully spend their gold, you create a meaningful system filled with player driven choice.

Through the encumbrance rules, magical consumables, and magic item merchants, I plan to provide player facing options to make gold an important part of each character’s individuality and progression. I’m excited to see how it these options play out in game. I’ll let you know how it goes.

What about you? How have you made gold more meaningful in your campaigns? What mechanics worked for your players?